This post has been “upgraded” to a page where updates will take place – IoT Device – Client or Server?.

You are planning an IoT Device. Now, is it implemented as a server or a client? In many cases the device can take on both roles, but one will be dominant. This is an important design decision that should be taken early. 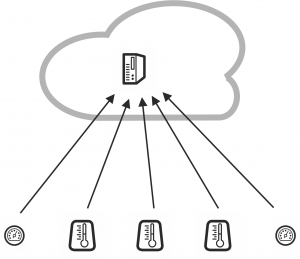 “Aggregating devices” often act as servers. These devices may be physically boxes/gateways harvesting data from many smaller, separate devices. Alternatively, they may be more advanced equipment directly giving access to many kinds of information. Based on already delivered data, some remote client decides what it wants to see next, or maybe even which local processing must be performed (think e.g. Industry 4.0).

To keep the cloud-server as a “clean” server, this design may involve a central device that has the role of client towards the IoT-devices, extracting relevant data. This client then delivers the data to the cloud-web-server. This client could run on the same PC as the cloud-server. However, considering server parks etc. this “extractor-client” probably runs on one or several separate PC’s. Thus it actively controls the IoT-servers that deliver the data, and hands these over to the big cloud-server.